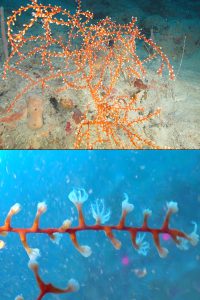 Hull-mounted sonars covered approximately 350 km2 of seafloor. Two multibeam echosounders were used to map seafloor features and habitat from 11 to 1,388 meters in detail for the first time. Furthermore, fish acoustic sonar was used to simultaneously measure fish distribution and size within the project area, and an ROV recorded high-definition video footage during 27 dives covering 9 km of seafloor over a cumulative 36 hours.

Rich assemblies of deep and mesophotic coral communities were documented and explored in the project area. These coral communities varied distinctly by depth strate. Coral densities were highest at shallow depths, 15 to 30 m. At deeper strata, black coral and octocoral sea fans aggregated atop rock walls. Several coral species were observed on steep wall features between 40 and 100 m, such as Swifta exserta, are also key to RESTORE ACT population connectivity research in the Gulf of Mexico.

Many snappers were observed among the deep mesophotic reefs. However, large groupers and snappers were notably absent from shallower waters, compared to other locations in the U.S. Caribbean previously mapped by NCCOS. Schools of small reef fishes, such as durgeons and damsels, swam in numbers along reef crests. 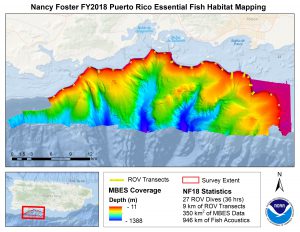 For more information contact Tim.Battista@noaa.gov or visit the project webpage.