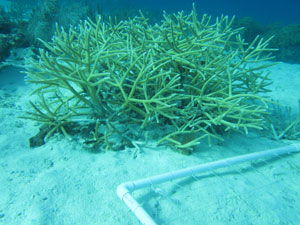 Collaborating with local partners, scientists from the National Centers for Coastal Ocean Science recently completed annual research missions in St. John, USVI, and the La Parguera/Guanica region of southwest Puerto Rico, where they continue to evaluate the health of marine resources, including reef fish, corals and invertebrates. In both locations, dive teams surveyed habitats to spatially characterize and monitor the distribution, abundance, and size of both reef fishes and macro-invertebrates (i.e. conch, lobster, sea urchin). This monitoring work and the resulting assessment products are used by local and regional resource managers for improved ecosystem management.

In St. John, the monitoring was conducted in and around the Virgin Islands Coral Reef National Monument and Virgin Islands National Park. This research mission was done in collaboration with NOAA's Coral Reef Conservation Program, NOAA's Southeast Fisheries Science Center, the U.S. Geological Survey, the National Park Service (NPS), NPS South Florida/Caribbean Network, and the Rosenstiel School of Marine and Atmospheric Science at the University of Miami. 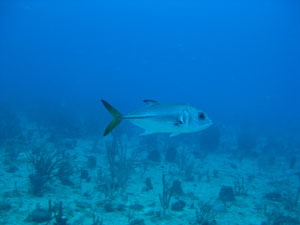 Since 2000, NCCOS has partnered with the University of Puerto Rico and NOAA's Coral Reef Conservation Program to monitor the marine resources of La Parguera off southwest Puerto Rico. This work is being done to support the Caribbean Fisheries Management Council and Department of Natural and Environmental Resources. In 2010, this original study area was expanded east to include the Guanica Bay region, to conduct a baseline characterization of fish and benthic communities in support of restoration efforts in the Guanica Bay watershed. By continuing to regularly monitor this area, potential changes in ecosystem metrics following restoration activities may be detected. The information collected in the annual monitoring missions establishes the knowledge base necessary for enacting management decisions in a spatial setting.

In addition to successfully completing each two-week monitoring mission, scientists fromNCCOS observed and killed several lionfish in both locations. In Puerto Rico, the individuals were small juveniles found in mangrove habitat, while the lionfish in St. John were observed on reefs. Native to the Pacific Ocean, lionfish have no natural predators in the Caribbean and are voracious predators of native fish species. 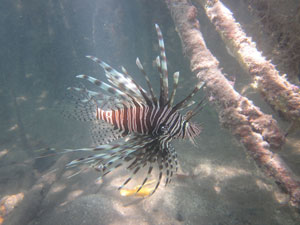 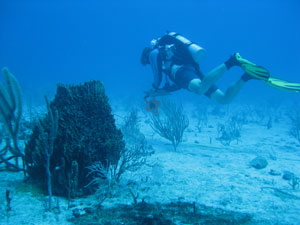