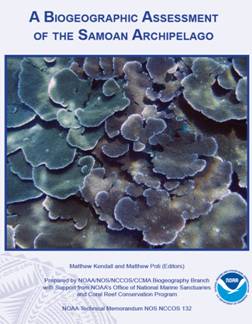 The NOAA report, A Biogeographic Assessment of the Samoan Archipelago, examines the regional ocean climate, distribution of reef fish and coral communities, and the biological connectivity among the islands of Samoa, American Samoa and neighboring islands. Image provided by the National Centers for Coastal Ocean Science

A new NOAA report provides the sharpest picture yet of one of the world’s more vibrant coral reef ecosystems and presents an approach for identifying and conserving marine biological hotspots throughout the region. Prepared by NOAA’s National Centers for Coastal Ocean Science, A Biogeographic Assessment of the Samoan Archipelago examines the regional ocean climate, distribution of reef fish and coral communities, and the biological connectivity among the islands of Samoa, American Samoa and their island neighbors. The report also looks at the extent of existing marine conservation areas. Key outcomes of the report include: (1) determining that climate-related changes include gradual sea level rise, as well as periodic low sea level events corresponding to El NiÃ±o and also rising surface water temperatures and the threat of coral bleaching; (2) development of ocean current models illustrating the international connections of larval coral and fish among islands; (3) identification of 51 regional hotspots for coral and fish; (4) identification of key sites not represented in the existing conservation network; and (5) establishing that only eight percent of the potential coral reef ecosystem in American Samoa is within existing marine protected areas.

Regionally, this is the first broad-scale, biogeographic effort to characterize marine ecosystems in such a comprehensive manner. The findings equip managers with the information necessary for making ecosystem-based management decisions. The lead authors of the report traveled to Hawaii, American Samoa and Samoa from September 13-22, 2011 to share findings with partners, stakeholders and policymakers. The assessment represents the continuation of ongoing partnerships between NCCOS, the Office of National Marine Sanctuaries and the Coral Reef Conservation Program.