Brevetoxin B2 - an abundant shellfish metabolite of brevetoxin found in Gulf of Mexico oysters - does not readily pass through an intestinal barrier, rendering it unlikely to cause neurotoxic shellfish poisoning. The B2 metabolite is produced by oysters and many other animals by attaching the amino acid cysteine to the brevetoxin that is consumed by shellfish during blooms of the brevetoxin producing algae. The B2 metabolite, like other brevetoxins, damages nerve cells and mimics other brevetoxins in the current testing methods that support management decisions used to protect public health. 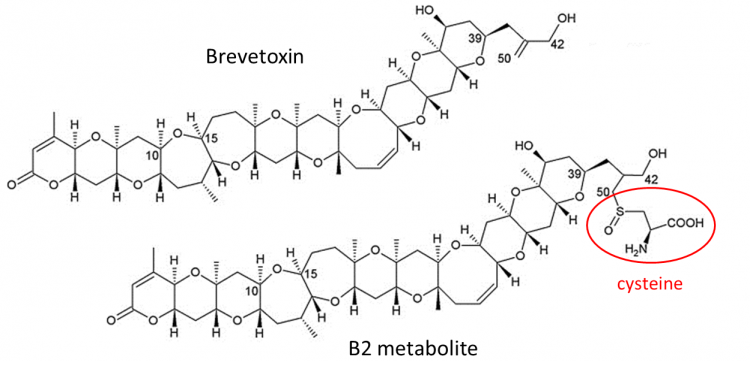 The chemical structures of the marine biotoxin brevetoxin and the brevetoxin metabolite B2. Credit. J. Ramsdell

Scientists at NCCOS and ANSES, the French Agency for Food, Environmental and Occupational Health & Safety, measured the ability of purified brevetoxin and the B2 metabolite to cross the intestinal barrier using an in vitro model for predicting drug absorption in humans. The results are available online and are published in the Feb. 2014 issue of the journal Harmful Algae showing that the B2 metabolite, unlike brevetoxin, does not transfer across the intestinal epithelium.

The results, which are being further confirmed in an animal model, indicate this common, long-lasting brevetoxin metabolite in shellfish can serve as a marker for exposure to red tides, but may not represent the health risk for shellfish consumers using currently applied testing methods.