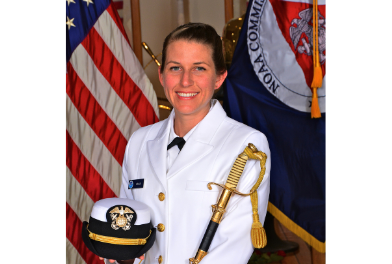 Prior to joining NOAA, Kraus worked as a Marine Endangered Species Observer for the National Marine Fisheries Service throughout the Gulf of Mexico and East Coast. Before joining the Biogeography team at NCCOS, she was assigned to the NOAA Ship Rainier where she worked on surveying the waters of Alaska, coastal Washington, and California. During this two year assignment she learned new skills in hydrographic surveying and ship handling. She became qualified as a Hydrographer in Charge, led the dive team as Divemaster, managed a bridge watch as an Underway Officer of the Deck, and helped improve Rainier’s public relations (tours, Facebook, etc).

Kraus graduated from the University of New Mexico (UNM) in December 2010 with a Bachelor's degree in Biology and a Minor in Environmental Science.  Currently she is working towards a Master’s degree of Science in Geospatial Information Sciences from the University of Maryland. Here she is learning skills in spatial modeling and programming using various ArcGIS platforms.