We investigate the relationship between nutrient pollution and downstream impacts to aquatic ecosystems. The figure below depicts the influence of nutrient pollution that drains into the Mississippi River in fueling the Gulf of Mexico hypoxic zone, the largest hypoxia area along the US coast. 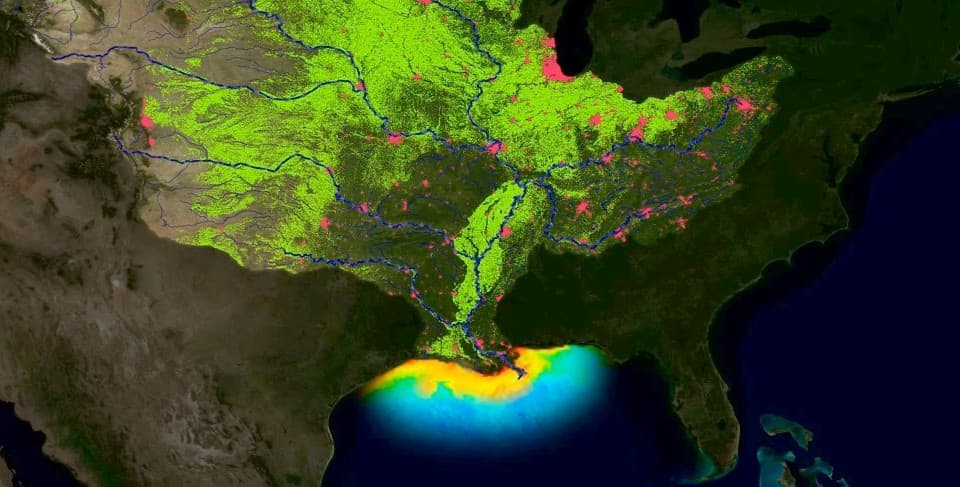 Hypoxic zones are areas in aquatic systems of such low oxygen concentration that animal life suffocates and dies, and as a result are sometimes called "dead zones." Learn more with this video visualization from NOAA's Environmental Visualization Lab.

Hypoxia, or low dissolved oxygen, occurs when the amount of dissolved oxygen in water becomes too low to support most aquatic life (typically below 2 mg/l). Hypoxia is a globally expanding problem impacting aquatic ecosystems and although hypoxia can occur naturally, it is often a symptom of degraded water quality resulting from man-made activities (e.g. nutrient pollution). Common sources of nutrient pollution include agricultural runoff, the burning of fossil fuels and wastewater treatment discharges. Over half of US estuaries experience natural or human-induced hypoxic conditions at some time each year and the frequency and duration of hypoxic events have increased exponentially over the last few decades.

Hypoxic waters can become dead zones or lifeless as mobile animals that can escape, move to other areas and those that cannot often die. Sub-lethal effects also occur to organisms in the affected areas and can include cell damage and other oxidative stresses, endocrine disruption, reproductive impairment, and impacts on behavior or movement. These effects can indirectly influence health or survival and over the long term, animal populations and commercial and recreational shellfish and fisheries decline within hypoxic zones.

Eutrophication-driven water quality impairments started to become evident in the 1960s and grew to be a national issue ever since the 1970s, ultimately leading to passage of the Harmful Algal Bloom and Hypoxia Research and Control Act in 1998. Otherwise known as HABHRCA, this legislation mandates NOAA to administer national competitive programs to advance the scientific understanding and management capabilities to assess, predict, and mitigate hypoxia events.

Our goal is to provide timely scientific results for use by natural resource managers to restore and protect coastal ecosystems. We do this primarily through two long-standing competitive research programs: the Northern Gulf of Mexico Ecosystem and Hypoxia Assessment (NGOMEX) and Coastal Hypoxia Research (CHRP) programs. Additional targeted efforts are supported to fill the science needs of regional and stakeholder nutrient management organizations such as the Mississippi River/Gulf of Mexico Hypoxia Task Force.

Click on one of the links below for more information.